A whole new generation has come and many now have children of their own, since the terrible night of 21st December 1988, The Lockerbie Bombing.

In 1993 award-winning film director Allan Francovich carried out his own investigation into the bombing, why it had happened, and who could have been responsible.

He died on this date - 17th April - in 1997. We are grateful to Professor Robert Black QC, Emeritus professor of Scots Law at Edinburgh University, who has provided extracts from an obituary written for The Independent by former MP and Father of the House Tam Dalyell. 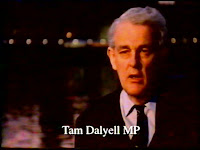 "That Allan Francovich should die prematurely, succumbing to a heart attack in the Customs Area of Houston Airport, is hardly astonishing to those whose lives were touched by this remarkable, hyperactive film director. I picture him arriving to meet me in the Central Lobby of the House of Commons, bag and baggage full of contents, out of breath, and blurting out the latest discovery that he had made about the iniquity of the authorities.

He reeled off facts at a mind-boggling rate. Yet, unlike most conspiracy theorists - of which he was proud to be one - Francovich was scrupulous about fact, and particularly about unpalatable facts which did not suit his suspicions. I never caught him cutting any inconvenient corners to arrive at the conclusion he wanted. He was, above all, a seeker after truth, wheresoever that truth might lead. (...)

My first introduction to Francovich was from Dr Jim Swire of the British Lockerbie Victims, who said that he had persuaded the best investigative film director in America to turn his attention to the crash of Pan Am flight 103 over Lockerbie, Dumfriesshire, on 21 December 1988 that had killed his daughter Flora along with 269 other victims.
Once persuaded that there was a cause for suspicion, Francovich was the most determined of ferrets. The end result was his film The Maltese Double Cross (1995), made in conjunction with his fervently loyal colleagues John Ashton and David Ben-Aryeah and their cameraman Jeremy Stavenhagen. The showing of the film on Channel 4, and in the House of Commons, did more than anything else to awaken the British from J S Mill's "deep slumber of a decided opinion" about responsibility for Lockerbie.
Quite simply, Francovich proved the so-called Malta connection, on which the case against Libya depends, was a fabrication. Francovich identified the shooting down by the USS Vincennes of an Iranian airliner carrying pilgrims to Mecca as the starting point for Lockerbie. The Iranian Minister of the Interior, Ali Akbar Mostashemi, swore that there should be a "rain of blood" in revenge. He had been, crucially, the Iranian ambassador in Damascus from 1982 to 1985, and had close connections with the terrorist gangs of Beirut and the Bekaa valley.

They had infiltrated an American drug sting operation, which allowed them to circumvent the security precautions at the Rhine Main airport in Frankfurt. It was typical of Francovich that he could go to the Jafaar family of the naive courier who had perished in Pan Am 103, and capture them on film in a powerful sequence showing up the activities of the Neuss terrorist gang operating in Germany.
It was Francovich's multi-dimensional, multilingual talents which I am sure will eventually unlock the truth about Lockerbie. Rare indeed, outside fiction, are the crusaders of truth who, time and again, have put themselves in personal danger as Francovich did.
Allan Francovich, film director: born New York 1941; married 1970 Kathleen Weaver (marriage dissolved 1985); died Houston, Texas 17 April 1997."

So how might we view Francovich's film in the light of recent history?

On December 14th 2014 - almost the twenty-sixth anniversary of the Lockerbie bombing - the investigative journalist Alexander Zaitchik of AlterNet wrote an extraordinary history of Francovich's award-winning documentary that was banned in the US and Britain.

The Truth about the Lockerbie Bombing - And the Censored Film that Dared to Reveal it.

Contained within Alexander's history is a link to the film documentary.  It marches alongside other attempts by British and US authorities to prevent public knowledge and discussion, including the continued concealment of trial evidence, denial of proven scientific truths about forensic evidence, and even attempts to temporarily close down a Scottish newspaper. (All detailed in previous posts on this site).

The American authorities spent $20m ensuring that Francovich's The Maltese Double Cross would never be seen in the USA. And the British, in their usual side-kick-of-America manner, almost ensured its complete banning in Britain. Over time, they have both failed. The film is available today from many internet sources, and has been viewed by millions.

Truth really does have that annoying habit of refusing to obey the instructions of those in power. All the truth about Lockerbie has not yet been revealed. But rest assured that in the not too distant future, it will be.

[Footnote: One of the best-known documentaries of Allan Francovich is his exposé of the C.I.A., On Company Business (1980). The film won him the International Critics Award for Best Documentary at the Berlin Film Festival. Born in New York City, Francovich was the son of a mining engineer and raised in various Bolivian and Peruvian mining camps. He attended Notre Dame University in Peru, the Sorbonne in France, and received a master's degree in dramatic arts from the University of California, Berkeley. He married Kathleen Weaver, a translator and writer, in 1970 and worked closely with her until they split up in 1985. Francovich's last film, The Maltese Double Cross, was released in 1994 and won first prize for a Documentary at that year's Edinburgh Film Festival.
Read more at http://www.allmovie.com/artist/allan-francovich-p90341#zK72rwMDxC4C1fil.99]
Posted by About us ... at 03:19