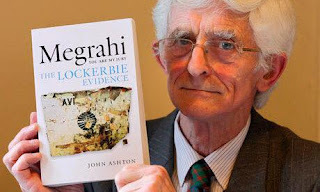 The old man pictured next to the book, his daughter died in the plane. He visited my dad before his death during the war when if it was not even safe to come to Libya but he insisted he visited him and he brought flowers and when he came my father was really ill and couldn't move out of his bed and even his face changed a lot from the illness so anyway we welcomed him and took him to my dads bedroom and when he saw my father he ran to him and told him I didn't expect it to be this worse and sat next to him and held his hand and he said I'm really sorry and I'm confident and I know your not guilty of this terrible crime. This was a historical meeting for us and if there was a government then they could've even took pictures from this meeting or even put it on the t.v so that the world. I just wanted you to know this so that the world can know.